Consistently clever–that’s the first thing that’ll strike you when you read through Melanie Les’s haikus. Her variations on an alphabet have the uncanny ability to entice enlightened giggles and smirks.

Using grid paper and an Instagram filter, Melanie took to her Olympia Traveller de Luxe to craft twenty six haikus for the A to Z Blog Challenge in April of 2014 (National Poetry Month).

“I had finger aches,” she mentions. “That does sound kind of wussy. It made me think about how the writers who wrote on typewriters were kind of ballsy.”

A freelance writer based in Singapore, she made the conscious effort to use her typewriter so she wouldn’t take herself too seriously. “I joked to my friends that I was ‘totes hipster.'”

Whether she was inspired by a Facebook post or something glimpsed at during a train ride, the typewritten haikus turned out to be a humbling experience.”As a typewriter noob, I was always fumbling around and throwing out paper because I spelt something wrong.”

She found a flow in the “structured randomness” of a theme and a medium. Haikus were chosen deliberately, due to her typewriter’s faulty mechanics. “I need to manually make line breaks by fiddling with the cylinder knob. That would have been a pain in the ass if I was writing short stories or even sonnets.” 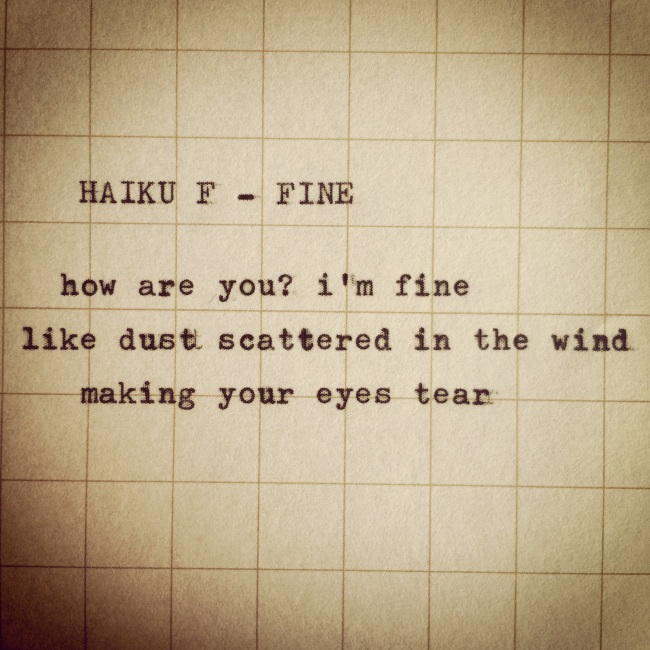 Often, Melanie noticed that the final typewritten haiku would be significantly different from the original draft written by hand or on her cell phone.

Why the organic edits? “Perhaps it was having another crack at the poem,” she muses. Melanie also thinks seeing the words and lines manifest onto physical paper influenced how she shaped the haiku in the moment.

Melanie received the Olympia as birthday present from her husband. Though the antique shop selling the typewriter was rarely open, he finally managed to purchase the Olympia on his fourth visit.

It was worth the wait. Melanie was going through “a particularly crap period” in her life: “my husband thought that pounding it out on a typewriter would help release some angst.”

“I think I wanted to overcome my fear of poetry. I don’t really understand most of it and have a lot of hang-ups about it being pretentious. But deep, deep down, I also really dig how good poetry has this power to unlock emotions and lower a person’s self-defense.”

I sprinkled this entire post with the haikus I’m in love with. To be fair, I asked Melanie to pick out her favorites, as well: 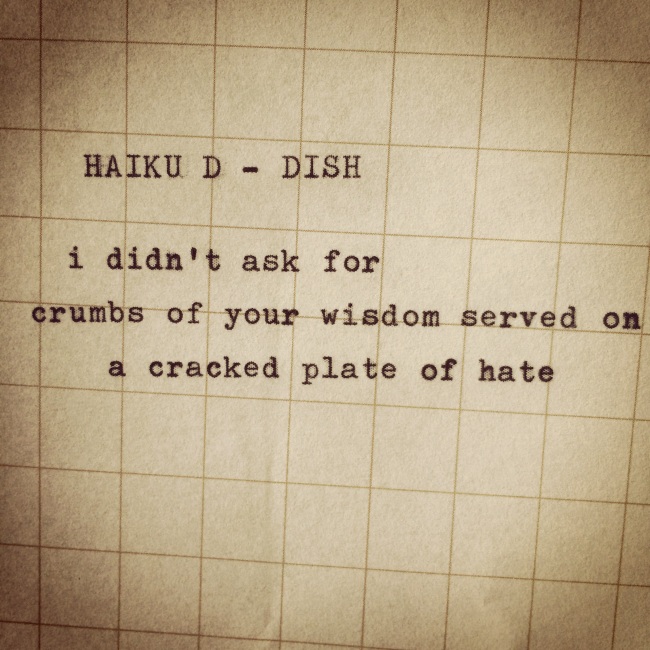 “I think I was getting weary of how so many people seemed to be pontificating their preferred worldviews on social media,” Melanie reflects. “I was pleasantly surprised by the snarkiness. Incidentally, this haiku was published in a local poetry anthology (SingPoWriMo 2014: The Anthology).”

“[Jelly] actually helped with my resolve in standing up to a certain situation at that point in my life.”

“The most honest one of the lot.”

A huge thank you to Melanie for allowing the time for an interview.

You can find even more “A to Z” haikus on her blog, Mental Indigestion.

She’s also the author of “Imaginary Friends,” a delightful book of fables to tickle (and warn!) the child in us all. Order a physical copy through the publisher, or grab an ebook edition on sale at Kobo and Amazon.