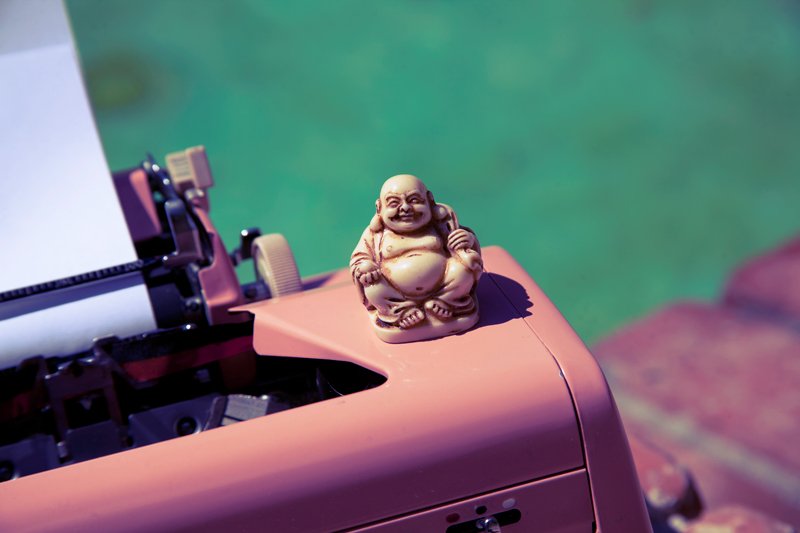 It’s good to be home.

I’ve been gone for a month, giving away poems while traveling up California and Oregon with Tyler. With our backpacks, we took to hitchhiking, busing, walking, walking, and of course, more walking.

…Did I mention I brought along my typewriter?

Tyler and I stayed in Ashland, Oregon for a week. Got a ride out of Mount Shasta, California with two women in a hippie goddess van.

I set up Typewriter Poetry during our downtime on the corner of Pioneer and Main. One afternoon, a man with a bicycle sat at a nearby bench. He watched me type poems for people and, after a time, asked what I was doing. We talked as he sat next to me on the fountain. I stared into his eyes as he reflected on his life, Buddhism, Ashland, his philosophies for living. I absorbed it all and gently pressed out a poem.

While exchanging goodbyes, he rummaged in his bag for something. It was a tiny buddha statue. It tumbled out of his hands and found home near my “free poetry” sign. 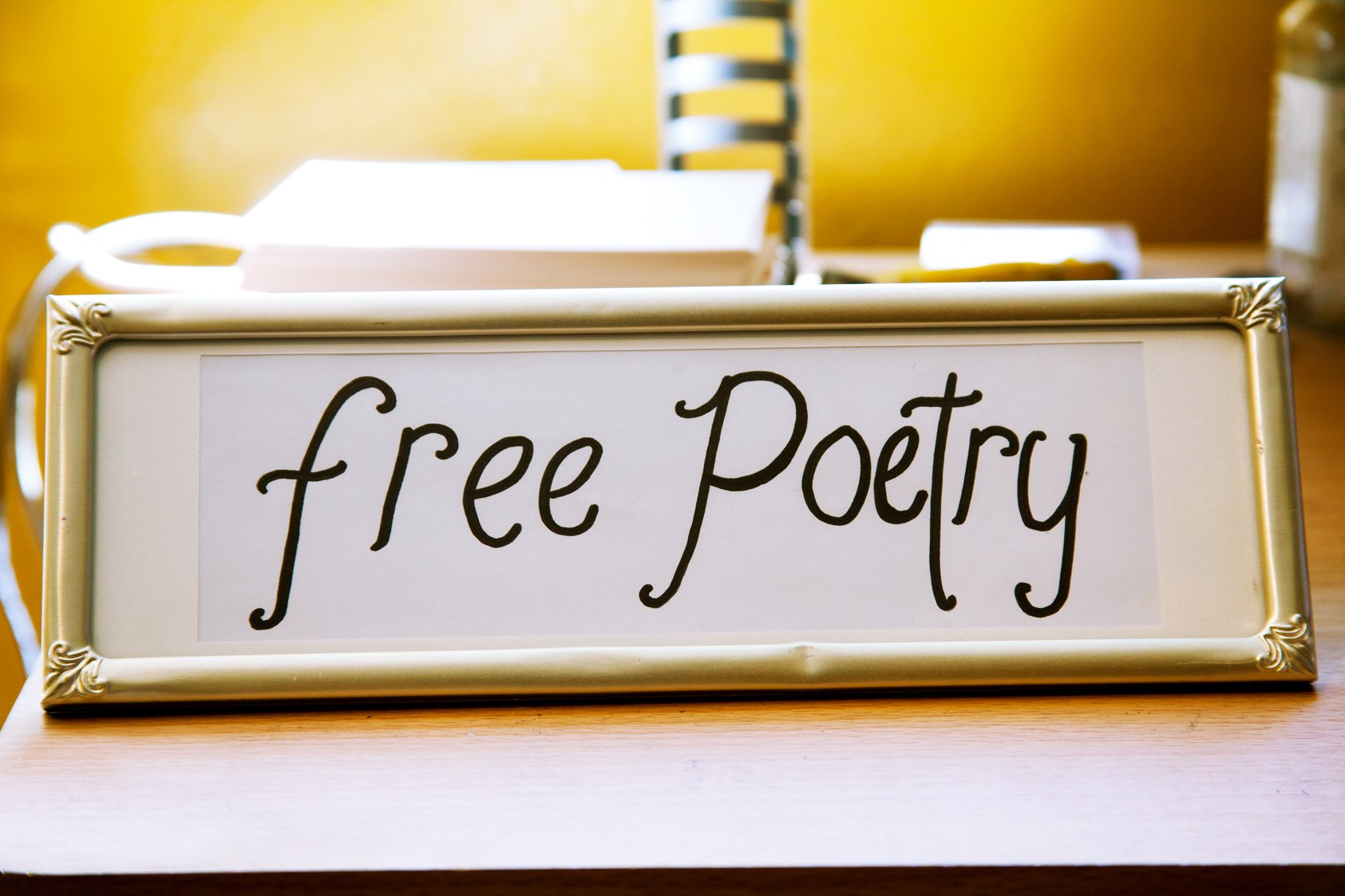 Shouting interrupted the serene moment between the buddha and poem. I looked up to find a figure walking toward us, surprised that the violence was directed in our direction.

As if making his way out of one dream and into another, a man with a name I have long since forgotten approached the three of us. He and his cowboy hat intruded on our territory and conversation. He was proselytizing, I realized slowly. Bits about false idols and false gods came tumbling out of his being, making a mess all around him. With pink sparkling fabric tied around his waist, he took to claiming buddha as false. “I,” he announced boisterously, “am the one. True. God.”

This man criticized my new friend for not paying me with money for a poem. I asked, “who are you to judge another person’s investment?” He repeated that line over and over again, as if singing a song. “Who are you?” he demanded in a deep melodic voice, emphasis changing each time. “Who are you?” He scared my friend away, then unkindly demanded I create a poem about my own question.

I took him in as I did everyone. He babbled and he babbled some more, his radio voice both soothing and irritating when coupled with his grandiosity. At one point, he dramatically took off his sunglasses. I confronted a piercing wild-eyed gaze that I have recognized on my own face several times before.

He affected Tyler and I deeply. We were both reduced to our knee-jerk, honest, unfiltered reactions. I watched as Tyler increasingly became enraged; his anger happened very quietly, beneath the surface, unnoticed by less watchful gazes. In me, I witnessed a sharp tongue I couldn’t hold back, an old habit I didn’t have for a long time. It was a talk with gentle caustic lashings, a talk others might not immediately pick up on as severe dislike and annoyance.

The man went on and on about angels and bitches; bitches this and bitches that. As I created a poem with him, everything around us dissolved into ephemeral spaces. The world seemed far away, out of touch. It was as if his entire person was quickly unveiled as I watched, this particular process much more chaotic than it usually is with others. I distinctly remember I didn’t have to search. It was all there, everything, every phrase and concept and method of delivery, all etched in the folds of his fabric, the fabric of his folds.

It was the first time I was legitimately put off by a person while doing Typewriter Poetry. Just by watching him interact with myself, with Tyler, and with other strangers, you could tell he took up a space that did not care to register matters of personal safety nor accepted public behavior. As a result, he was severely avoided and ignored.

I was surprised to find he was graceful. The way he interacted with the environment around him wasn’t bulky and forced, it wasn’t shy nor unsure. It was confident. Self-affirmed. Solid. There are very few people I’ve met in my life who have that same nature.

I first assumed he was high on something. Talking with Tyler after the fact, I have to agree that instead, he might have just not been all ‘there.’ Yet, even the word ‘there’ doesn’t do the situation any justice.

I feel strange talking about sanity (insanity?) in this manner. I feel strange rereading what I wrote because I want to make sure I acknowledge my own varied perceptions and experiences. There are gradients, not binaries, in how we dance daily with mental, spiritual, emotional activity. Insanity has always been a subject close to my heart, and like the abstract notion of god or love, I never like outwardly engaging in attempts to capture it because one will always fall short. I have since learned from Tyler that just because you fall short with words, it doesn’t mean you should stop trying.

I knew that out of all the million stories I could have told from our adventures wandering, this one would be the most important. I distracted myself by taking a few photographs of the gifted buddha and my typewriter, all the while trying to figure out how to write this post. I ended up choosing a photograph I don’t even like. In fact, I actively dislike it. But beyond the dislike, there is an essence I see glimpses of if I watch long enough, and that essence is worth the discomfort of observing something I find myself intensely disturbed by.

Last night I had my first nightmare in a while. When I am legitimately scared awake from a dream, it is always from a scene that appears to last no more than one to five seconds. A terror tailored to the beat of breath. In this particular dream, I ‘woke’ from sleep in my bed. I heard someone attempt to open the front door: a doorknob jangle, thick wood being pressed by a body. Suddenly, an older male friend of mine is crazy-eyed and on top of me, covering my mouth and holding a knife I recognize as one of my favorites from childhood. It is a thin knife with jagged edges and a stained dark brown wood. The wood is loose and wobbles as you use it, ready at any point to part way with the blade. In my dream, my friend made a quick move to stab my eyes. It was then I woke up quietly, without a gasp or a yell, the momentary suspension in time and place seeping through. My waking state overlaid perfectly with the dream. I listened intently in the off-color darkness for any hint that madness would rush out and strike. All that was felt was my own heart.

I don’t even know how to conclude this post, except for saying it was the first time I ever wrote a poem for someone I actively disliked–but strangely, simultaneously, paradoxically took a liking to because his methods of interaction were such a challenge and in that struggle there was a space that, though uncomfortable, seemed less contrived and scripted than with ‘normal’ folk. Convoluted and confusing is the nature of tangles. I am reflecting on the meeting and what I keep coming up with is quiet magnetic repulsion and violence at what we like to call ‘connection.’ There is also an image of collision. With what? At what? I don’t know. All I do know is Tyler and I were happy to to see him go, his talk of angels and bitches finished. He continued to rant to anyone who would listen. We were not surprised that no one would. Trailing away was that unique spoken word voice, very charming and Southern Gentleman, coupled with a California surfer swag and cowboy potential. All of it bundled up; a flow of its own. It is a flow I have deep respect for, and I hope I will not cross paths with that level of being before I build up all my strength. That way, when forced to swim, I will eventually–if not immediately–emerge from that stream: alive, fully intact, and ultimately still all ‘there.’